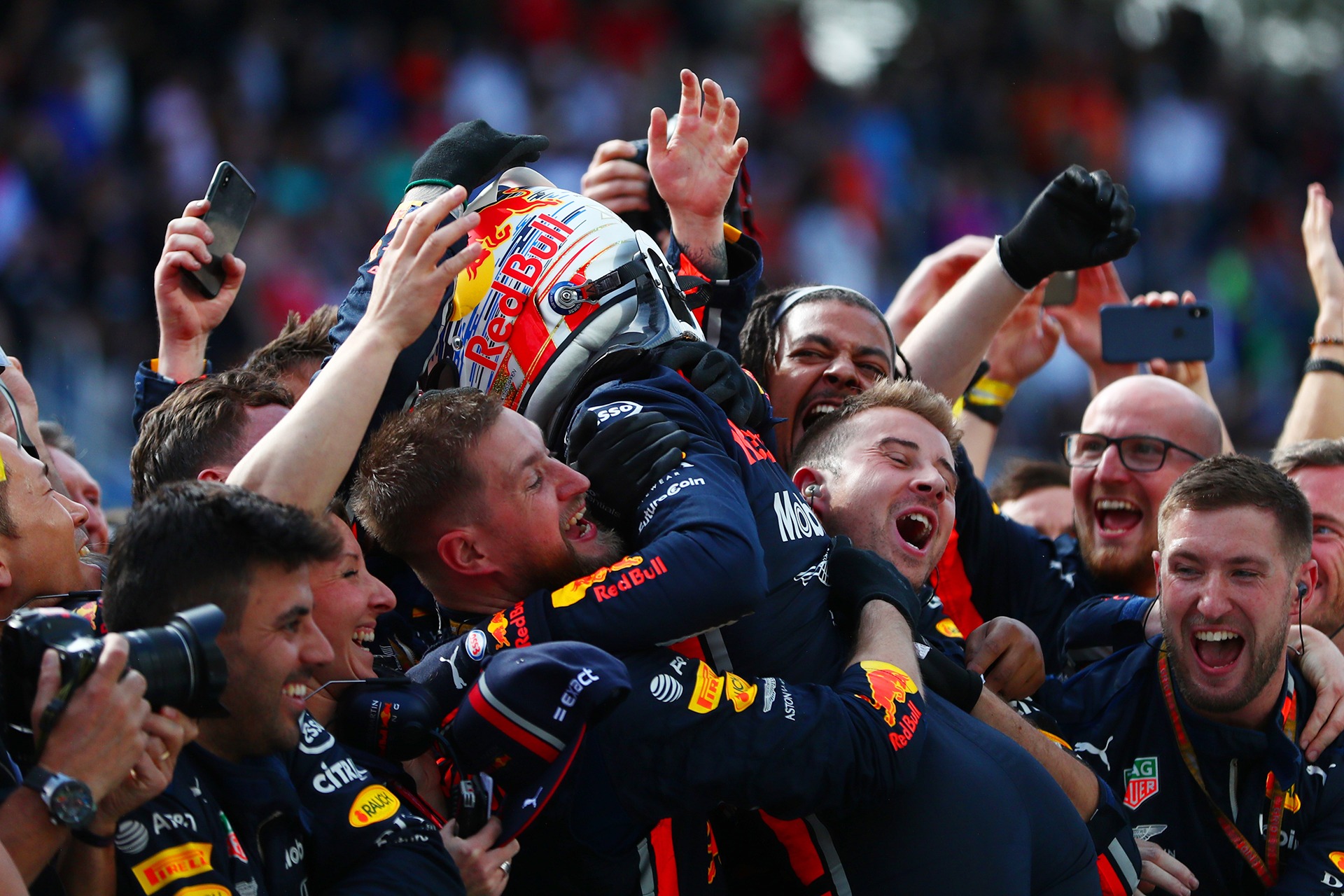 Red Bull is having their best year since the introduction of the hybrid drivetrain, leading both championships for the first time since Sebastian Vettel led the team to their fourth title in 2013.

The team seems to finally have the edge over Mercedes. Seems appropriate at this time to look back over the team’s history and where they began.

Red Bull have led innovation in F1 since they arrived in the sport, with their Bedfordshire wind tunnel being a part of that.

Aerodynamics has always been a strength for the team, due to the accessibility and testing of their award-winning tunnel. The success of this project was so great, that the sister team; Alpha Tauri, now also use the wind tunnel for pre-season development.

Red Bull of course is an energy drink at its core. The brand decided to alter its marketing mix to be seen as associated with extreme sports and fitness. They are title sponsors in soapbox racing, they sponsor the World Rally Championship, as well as mountain biking and many other extreme sports.

Therefore it makes sense that they decided to join Formula One in 2004.

Red Bull bought Jaguar Racing’s Formula 1 team on the 15th of November 2005, for $1m, with a commitment to invest $400m in the team over the next three seasons. Jaguar was originally purchased by Ford, and after a disaster first few seasons, withdrew from F1 and passed it over to Red Bull.

Jaguar only managed two podiums throughout their five seasons, with Eddie Irvine finishing third in Monaco in 2001 and Monza in 2002. The Jaguar team was led by three-time F1 champion Niki Lauda, from 2001 to 2002, as well as Haas team principal Guenther Steiner, as the team’s managing director for this period.

After their ending, Ford said that it could “no longer make a compelling business case for any of its brands to compete in F1”.

Red Bulls decision to buy into Formula One fitted perfectly with the direction their brand image needed to be; a high intensity, high activity, sport and fitness model.

Red Bulls co-founder Dietrich Mateschitz was instrumental in bringing Red Bull into F1 and even maintains an interest in the sport today.

Adapting to Formula One

Red Bull decided that David Coulthard would be their lead driver for their first year in Formula One. Coulthard was an incredibly experienced driver, having been a race winner with McLaren for 9 years before joining Red Bull in 2005.

The team switched between Christian Klien and Vitantonio Liuzzi as their second driver throughout the season, with Klien winning the seat outright from Canada onwards.

In their debut year, the team finished with 34 points, leaving them in seventh position of the constructor’s championship, not a bad result for the new team as they overtook more experienced names like Sauber and Jordan.

Throughout their next three years in the sport, Red Bull failed to score as many points as they did in 2005, however, 2007 was their highest finish, ending up fifth in the constructor’s championship, beating Toyota and both Honda teams.

Red Bull did make one huge move during this time. In their first year, Red Bull had used a Cosworth engine, before switching to a Ferrari engine for 2006. However, in 2007 Red Bull decided to make another change, switching to the Renault engine. This move was hardly surprising, considering Renault had just come through with back to back championships; thanks to Fernando Alonso.

This move didn’t bring immediate success but would turn out to be an excellent move for the future. Red Bull also made another important move in 2007 with Mark Webber joining the team, having previously spent two years with Jaguar.

2009 seemed to be the turning point for the team. Sebastian Vettel, who had won a race the year prior with Red Bulls junior team, joined the Senior team to be its provisional second driver, alongside Mark Webber after David Coulthard retired.

Coulthard had decided to join Red Bull as a testing and development consultant. The season didn’t start great, however, both drivers did score points in the opening race. Later that season, in China, Vettel converted a pole position to get the team their first win, with Webber finishing second for an excellent result for the team.

2010 seemed like the year for Red Bull, with title winners Brawn losing both drivers and eventually selling to Mercedes. The title race turned out to be one of the best Formula One has ever seen, and Red Bull initially looked to be on the back foot, having seen Vettel retire in Korea, leaving Fernando Alonso 25 points ahead in the championship with just two races remaining. Incredibly, Vettel managed to win both races, and after Alonso finished seventh in Abu Dhabi, Vettel claimed his and the teams’ first world titles, edging out Alonso by just four points, while also beating McLaren by 44 points in the constructor’s championship.

It only got better and better for Red Bull over the next three years. Sebastian Vettel dominated the 2011 season, claiming 11 wins and beating out his closest rival Jenson Button by 122 points, and with Red Bull once again beating out McLaren, but this time by 153 points.

2012 ended up being probably one of the best title races in F1 history, with seven world champions on the grid, it produced an incredibly even grid, with a different driver winning each of the first eight races.

Vettel went on to win the next four races and thanks to Jenson Button holding off Fernando Alonso for first, Vettel claimed his third world championship in a row, beating out Fernando Alonso by three points.

2013 was Red Bull’s most dominant year, with Vettel winning a staggering 13 races in the year, including winning the final nine races and smashing the driver’s title by 155 points.

Eventually, the cracks in the team did start to show. Malaysia came up with the team’s famous “multi 21” incident where despite being told to remain behind teammate Mark Webber, Vettel overtook him anyway, to win the race. Tensions remained high between the two drivers, with Webber saying that the team heavily favoured Vettel and did not treat both teammates equally.

Red Bull made huge changes going into 2014. The V8 engine which had been used for all four titles was scrapped as new engine regulations meant that the introduction of the hybrid engine was now mandatory.

It turned out to be a horrible year for Vettel, especially coming from four dominant years within the driver’s championship. Vettel left the team at the end of the season, to join rival team Ferrari.

Dani Kyvat was Vettel’s replacement, who would help carry the team and finish fourth in the constructors, claiming just three podiums all season.

For Red Bull, the hybrid era also saw them move on from Renault, with what turned out to be a messy divorce. Clashes between new driver Max Verstappen and teammate Daniel Ricciardo forced Danny Ric to leave Red Bull.

From the teams’ introduction to the sport, Red Bull appointed Christian Horner as principal, becoming the youngest Formula 1 team manager in history. Horner has also handled Red Bull’s engine problems over the last couple of years, leaving Renault and then making the jump to Honda’s engine division.

Horner enabled Honda to remain in F1, despite their plans to leave the sport at the end of 2021. One of Horner’s first big appointments was Adrian Newey, who was instrumental in developing the cars for Williams and McLaren that produced six world titles.

Newey has been the lead developer for all of Red Bull’s title-winning cars and has created timeless motorsport designs which have been dominant in the sport, the RB7 and RB9 as highlights.

Red Bull had set up a driver development programme in 1999, six years before they became a team in F1. Helmut Marko has been head of that programme since, and under his guidance, the team has brought through race winners like Sebastian Vettel, Max Verstappen, Daniel Ricciardo and many more talented drivers. Marko is also a key adviser to not only Red Bull but their junior team Alpha Tauri