The Mercedes AMG F1 team is the current dominant force in Formula 1. Having won the last 7 world championships, Mercedes seem to be in a very comfortable position and historically, F1 has never seen a manufacturer so consecutively successful.

With the 2021 season producing an exciting championship battle between the Silver Arrows and RedBull’s Max Verstappen, could this be the end of the Mercedes tyranny?

Mercedes have a brief history in what was Formula 1’s predecessor, “Grand Prix Racing” under the brand name of Mercedes-Benz. In the 1930s Mercedes were as they are today; dominant.

The team back then was well funded which led to extensive development and car design, winning all 3 European Grand Prix Championships up to 1934.

1954 saw the return of the Mercedes-Benz based team, however this time, they would be rebranded, Daimler-Benz for what is now known as the Formula One world championship.

With the reimage of Grand Prix Racing to Formula One in 1950, it saw a surge in manufacturers and teams taking part in the sport. Mercedes-Benz entered the championship in 54’ with two styles of car, one conventional open-wheel format and another streamlined version of the car.

The closed-wheel version featured enclosed wheels and a wider body and was the first and only car in F1 history to win a race in a closed-wheel configuration.

Fangio ultimately was the season winner for Mercedes-Benz in 1954, which secured him a seat to drive for Merc again, alongside new driver, Sterling Moss in the 1955 season which turned out to be a brutally visceral year.

In 1955, the Mercedes/Daimler team continued its successes, with a carryover of the W196 car. Both Fangio and Moss took victories this season and the team reinstated its dominance once again.

This season however took a turn for the worse with the 55’ Le Mans disaster. For those unaware, this was a horrific crash at the Circuit de la Sarthe in France, that killed Mercedes driver Pierre Levegh and over 80 spectators at the race.

This crash consequently caused the closure of the French, German, Spanish and Swiss Grands Prix. 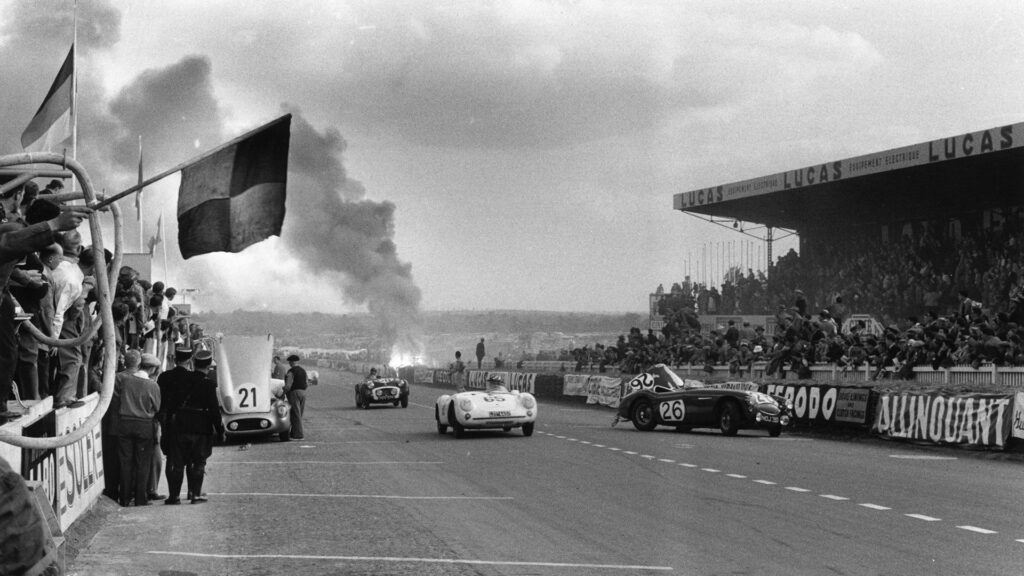 At the end of the 1955 season, Mercedes withdrew from motorsport completely despite their overall F1 successes.

The Mercedes brand was not seen in Formula One for a long time. 40 years after the Le Mans disaster, ‘Mercedes AMG High-Performance Powertrains’ had emerged from the woodwork.

They now owned a manufacturing plant in Brixworth, UK and were able to supply formula one teams with reliable power units. In the 1995 season, Mercedes were the engine builders for Sauber initially, before changing to McLaren in an extremely successful 20-year partnership.

This success led to the signing of further teams, with Brawn GP and Force India (now known as Racing Point/Aston Martin). The Mercedes power units grew in strength and the following year’s signed further teams, Williams and Lotus.

As an engine supplier, the team has been incredibly fruitful, with over 100 wins and is ranked the fourth most successful powertrain in Formula One history.

The Re-birth of Mercedes

Mercedes-Benz finally returned to Formula One as a Team for the 2010 season after buying a minority stake (45.1%) in the Brawn GP team. A sensible move considering Brawn’s undoubtable success in its only season of Formula One.

Following the purchase of the team, as well as a sponsorship deal with Petronas, the team was rebranded as ‘Mercedes GP Petronas Formula One Team’. The team took on board two German drivers to lead a predominantly German licensed team with Nico Rosberg and seven-times world champion Michael Schumacher, who returned to Formula One after a three-year absence. 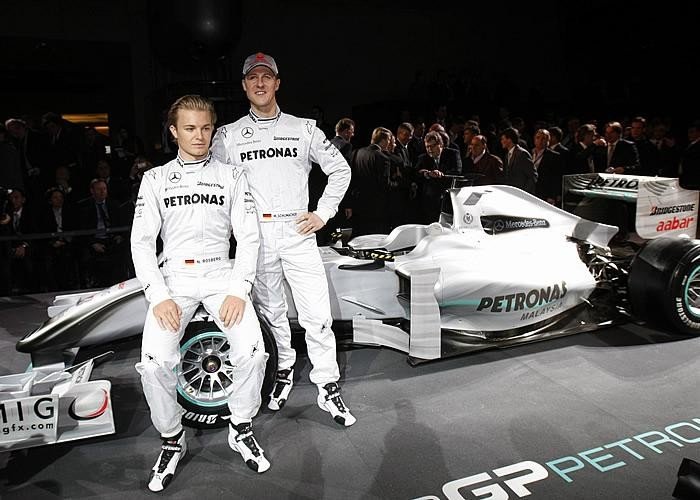 Mercedes’ re-introduction to motorsport was not a smooth one, with a mixed success that ultimately had the team finish fourth in the Constructors’ Championship, with 214 points. Having 0 wins, 0 podiums and 0 pole positions.

Unfortunately, the team had continued results in the 2011 season with little noticeable development to the car and again the team failed to score a win, podium or pole position.

At the third race of the 2012 season, in China, Rosberg took the first pole position as a works team since Fangio in 1955; Schumacher finished the session third but moved up to second after a grid penalty for Lewis Hamilton. Finally, it seemed that the newly named ‘Mercedes AMG’ were on form.

An innovative design of the F1 W03 chassis, complete with a unique ‘double DRS’ wing system saw initial pace with Rosberg. Under a lot of scrutiny from other teams, Mercedes ended up losing pace throughout the season and again finished in a reasonable mid-pack position at the end of the season.

2013 was a big year for the Merc team. Dropping Michael Schumacher as a signed driver and picking up a brand new contract with Lewis Hamilton, the team was finally showing ambition and progression.

With Toto Wolf also joining the team alongside business partner Rene Berger, the team would see new financial backing and a chance for further development of management and internal organisation. Wolf purchased 30% of Mercedes-Benz Grand Prix Ltd, with a further 10% held by Niki Lauda, current chairman of the board. 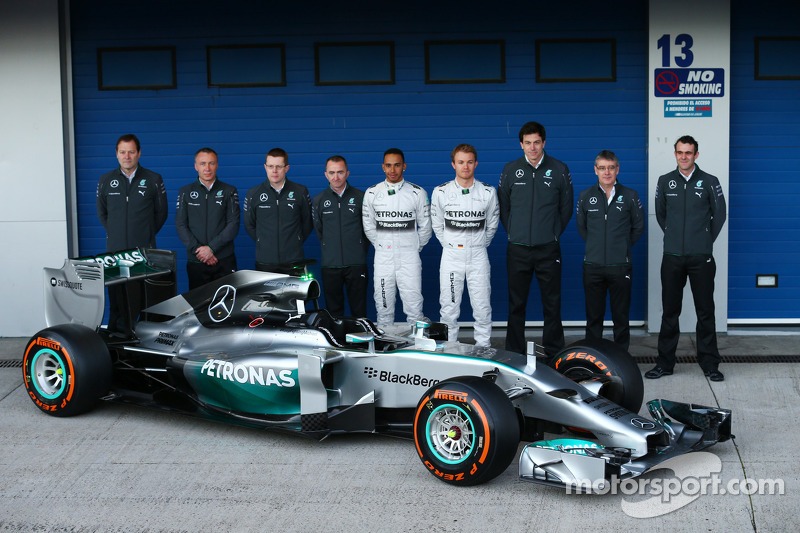 The new Mercedes dynamic proved to be a success, with Rosberg capitalising and winning the Monaco Grand Prix. Rosberg and Hamilton would both then gain further wins at the British and Hungarian races.

In 2014, formula one saw the introduction of the new V6 Turbo engine design and with it were new Formula 1 chassis designs.

Mercedes-Benz really did lead the way with the innovative design of the W05 car. Every so often in Formula One, a team comes up with a completely revolutionary design which gives them a massive advantage over the competition.

The innovation came from the Mercedes power unit, with a design where two parts of the turbocharger, the turbine and the compressor, are split rather than packaged together, as per standard.

He also notes ancillary benefits such as smaller sidepods, meaning improved aerodynamic efficiency, since the air going from the turbocharger to the engine does not require as much cooling, as well as a better centre of gravity for the car.

These changes in design saw immediate dominance of the 2014 season with Rosberg and Hamilton winning 16 of the available 19 races, 18 pole positions and 11 1-2 finishes. This led to the team’s first constructors’ and drivers’ championship since the 1954 season.

The Rest is History

The teams’ obvious success led to huge improvements in the team, onboarding bigger and better sponsors, engineers and team standards. 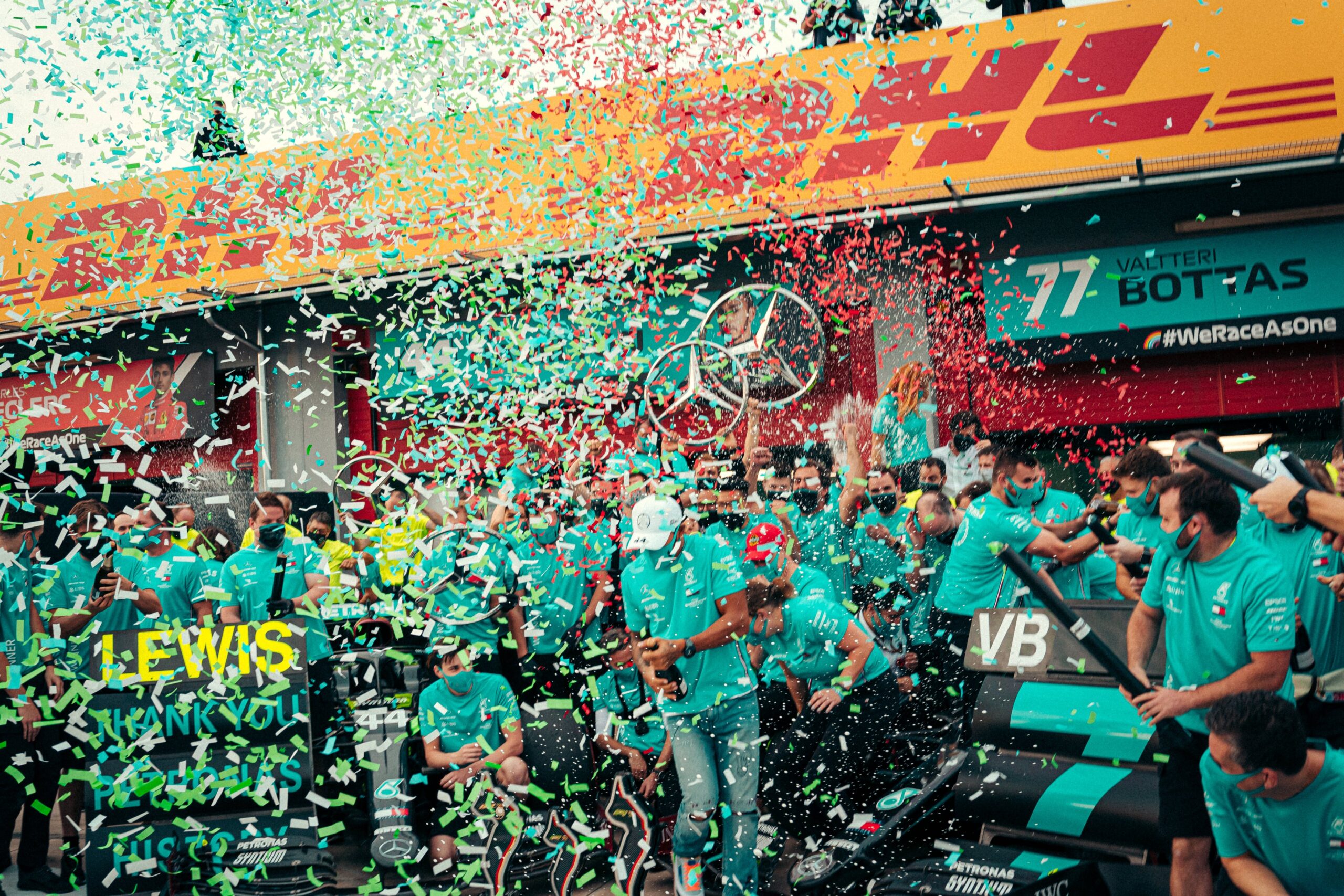 There is not much more that needs to be said about their recent drives, other than that their impeccable regiment and determination has been reinforced by a notorious management system from Toto Wolf.

The team shows no sign of moving for the coming years, with new contracts signed by Lewis Hamilton and the introduction of George Russel to the team, which should show some exciting competition for the 2022 season.

As well as running their dominant F1 team, Mercedes (like other F1 teams) are critical about raising and developing the best drivers in Formula 1. Their Junior team consists of many names in motorsport that you will surely recognise.

By raising the best, the team hopes to promote new, fresh talent into the sport. George Russell being the flagship name for this.

Russell has been a member of the Mercedes-Benz Junior Programme since 2017, when he won the GP3 Series championship as a rookie, before repeating the feat in Formula 2 in 2018. He has been a fully-fledged Formula One race driver with Williams Racing since 2019, demonstrating impressive qualifying and race performances during the past two seasons.

At the Sakhir GP in 2020, George Russell was given the go ahead to drive for the Merc team, to replace Lewis Hamilton after he tested positive for CoronaVirus. Qualifying showed some serious promise for the young Brit, who finished 2nd, 0.026s behind current team member Valteri Bottas.

On race day, Russell immediately took the lead and stayed out in front for the majority of the race. Unfortunately, a pitstop blunder meant that a further pitstop would be needed, followed by a controversial puncture.

Both of these incidents resulted in Russell finishing 9th and losing out on what was going to be a promising first F1 win.